WHAT IS OVARIAN VEIN EMBOLISATION FOR PELVIC VENOUS INCOMPETENCE?

The veins are a low pressure system and are dependant on valves to aid return of blood to the heart. These valves may become incompetent (leaky) resulting in reversed flow in the ovarian vein and dilated veins in the pelvis. This is an under-recognised cause of pelvic pain and congestion in women, particularly those who have had children. Pregnancy and the growing foetus may place pressure on the ovarian veins, causing dilatation and valvular dysfunction. These dilated veins (internal pelvic varicose veins) persist after delivery.

WHAT ARE THE SYMPTOMS OF PELVIC VENOUS INCOMPETENCE?

Pelvic venous incompetence may be a cause of pelvic pain (also called pelvic venous congestion syndrome). This pain may be nagging in nature, affecting the loin and pelvis. The pain may be worse at the end of the day, after prolonged standing or after exercise. It may cause bladder irritation, period pain and pain related to intercourse. The internal nature of these varicose veins means that this condition may be often under-recognised. However in some cases, the ovarian vein reflux may manifest as varicose veins on the vulva, or worsening/recurrent varicose veins in the leg. In these cases, the ovarian vein requires adequate treatment prior to treating the varicose veins in the leg.

HOW IS OVARIAN VEIN EMBOLISATION FOR PELVIC VENOUS INCOMPETENCE DIAGNOSED? 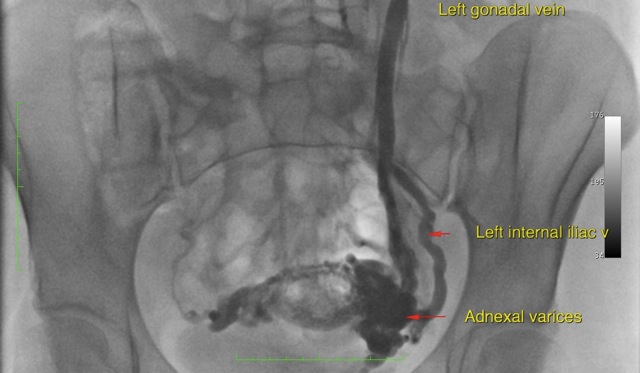 Pelvic images of the same patient demonstrates venous varicocities in the left side of the pelvis, refluxing across the midline to the right via dilated uterine veins.

A CT scan may demonstrate an enlarged ovarian vein (greater than 8mm diameter). Other abdominal and pelvic organs can also be examined at this time, as well as the configuration of the superior mesenteric artery. A pelvic MRI, especially tailored to examine the pelvic veins are also an excellent way to view these abnormal veins.

Up to 15% of all women in reproductive years have pelvic varicocities. However, not all of these women experience symptoms. Once other pelvic pathology is ruled out and the patient is suffering from pelvic symptoms or varicose veins, consideration could be given to treating the incompetent ovarian vein.

HOW IS OVARIAN VEIN EMBOLISATION FOR PELVIC VENOUS INCOMPETENCE TREATED?

Pelvic venous incompetence may be treated with endovascular embolisation. This procedure is performed in an angiography suite. It is normally performed as a day-only procedure. 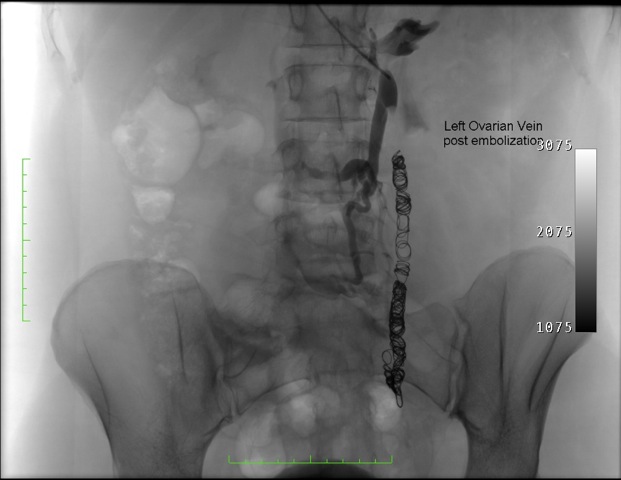 Images of the left ovarian vein in the same patient after coiling. Platinum coils are seen in the ovarian vein which is now occluded. This patient had an uneventful recovery and resolution of pelvic symptoms.

After administration of sedation and local anaesthetic, access is gained to the venous system via an ultrasound-guided puncture. The access vein may be a vein which lies above the collar bone or the femoral vein at the top of the leg. Both approaches are safe and equally comfortable. As no cut is made in the skin, there should be no residual mark or scar. An angiogram (injection of x-ray dye) is performed in order to localise the incompetent ovarian vein. A small catheter is then navigated to the ovarian vein within the abdomen and pelvis. Small platinum or stainless steel coils (filaments) are then deployed through the catheter into the vein. These coils mechanically occlude the vein, causing the to clot and involute. Often, a sclerosant is also injected in order to reduce chances of the vein re-opening after the procedure. The vast majority of cases involve treatment of the left vein only. Right sided varices may often be caused by reflux across the midline from the incompetent left ovarian vein. In the unusual circumstance that both veins require treatment, these should be done in separate episodes in order to minimise post-operative discomfort. After a short period of observation (normally 2 hours) the lady may return home and normal duties may be resumed the following day. Heavy lifting and prolonged exercise should be avoided for several weeks. There may be some mild discomfort in the flank and pelvis in the following week. The next menstrual cycle may also be uncomfortable as there is some re-adjustment of the pelvic flow dynamics. http://www.sirweb.org/patients/chronic-pelvic-pain http://www.cirse.org/index.php?pid=105